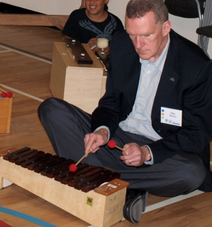 After 35 years service in public education, Mike McKay retired in December 2013 from the superintendency in Surrey School District, a diverse and dynamic school system in one of Canada’s fastest growing cities. As Superintendent and CEO of Surrey Schools, he was responsible for a student and staff population of almost 80,000. Mike’s leadership and vision based on giving “every child, every chance, every day,” helped to produce solid results in Surrey Schools as evidenced by increasing student success rates at all levels.
In addition to having taught at both elementary and secondary levels, beginning in the Interior and moving to other districts in BC, Mike has served as a school and district administrator since 1986.  He has worked with the Ministry of Education as Director of Educational Innovation responsible for provincial intermediate and graduation programs.  He also served as a member of the Provincial Working Group on Accountability Agreements and District Reviews leading him to develop a School Review Process and Workbook to assist schools in their own school improvement processes. In July 2012, Mike was appointed Official Trustee for the Cowichan Valley School District for a period ending with the scheduled trustee elections in November, 2014.  Commencing in April, 2014, he has also served as Strategic Advisor to the Ministry of Education.
Passionate about the difference that can be made through quality education, Mike has been appointed to the Boards of several organizations committed to championing Canada’s public education system and promoting B.C. internationally.  He is active as an education and leadership consultant and speaker to school districts and educational institutions focusing on self-regulation, innovative leadership, accountability, ethics and professional learning communities.  In collaboration with Dr. Stuart Shanker, a world-renowned leader in the field of self-regulation, Mike founded the Canadian Self-Regulation Initiative in 2012.  At the Fall 2014 Convocation Ceremonies, Kwantlen Polytechnic University awarded Mike an Honorary Doctor of Laws Degree for service to education and to the community.
Mike and his wife Lynn, who is also deeply committed to education, continue to live in Surrey.  They are proud parents of three adult children and completely smitten grandparents of three youngsters.